On March 9th, 1960, students at the Atlanta University Center (Atlanta University, Clark College, Interdenominational Theological Center, Morehouse College, Morris Brown College, and Spelman College) published “An Appeal for Human Rights” in the Atlanta Journal, The Atlanta Constitution, and The Atlanta Daily World newspapers. The manifesto was subsequently published in The New York Times, and later The Nation. On March 12th Senator Jacob Javitz included the “Appeal” in the Congressional Record.

Primarily authored by Spelman student Roslyn Pope, the document was a preamble to a coordinated series of marches, pickets, and sit-ins that became known as The Atlanta Student Movement (ASM). The series of bold, student-organized protests carried out over a period of more than two and a half years, resulted in desegregation of restaurants, stores and public facilities in Atlanta.

This pivotal phase of demonstrations in Atlanta was orchestrated by future luminaries, including Lonnie King Jr. and Julian Bond, as well as Joseph Pierce, Charles Black, Herschelle Sullivan Challenor, and Roslyn Pope. Scores of other students like Georgianne Thomas, Morris Dillard, Willis Sheftall, Gwendolyn Harris Middlebrooks, and Johnny Parham participated in protests and stood on the front lines of the ASM as foot soldiers. Rev. Otis Moss, Jr. was a Morehouse graduate and a leader in the first wave of activism among AUC students in the 1950s that led to the desegregation of the Atlanta Public Library. He continued to play a leading role in the ASM as an ITC student in 1960.

The ASM became a catalyst for social change on a national level after civil rights icon Rev. Martin Luther King, Jr. was arrested and then sent to prison after he protested with students in front of Rich’s Department Store in downtown Atlanta. Presidential candidate Senator John F. Kennedy interceded to have King released. That act swayed thousands of black voters across the nation who had historically voted for Republican candidates. Historians acknowledge that the African American electorate helped to ensure Kennedy’s victory, making him the 35th President of the United States.

Though too few of our students know about the existence and impact of the ASM, there are a dozen historical markers in the AUC and other locations in the city commemorating it. The Commission to Honor an Appeal for Human Rights and the Atlanta Student Movement erected the markers. That group is spearheaded by the son of ASM leader Julian Bond—Atlanta City Councilman Michael Julian Bond. One marker stands in front of the Clark Atlanta University (CAU) Student Center at Atlanta Student Movement Boulevard and Brawley Drive (formerly Fair and Chestnut streets). The location was once the site of Yates and Milton Drugstore, a student hangout where Morehouse’s Lonnie King and Julian Bond first talked about following the example of the four students at North Carolina A&T who conducted a sit-in at a lunch counter in Greensboro, North Carolina in February 1960, igniting a national student movement for civil and human rights. Not far from Morehouse, just off Atlanta Student Movement Boulevard and Mildred Street, stands another marker. One also stands on the quadrangle of CAU next to Trevor Arnett Hall. Still another was erected at the former site of Rich’s Department Storewhere Rev. King was arrested. The building is now the Sam Nunn Atlanta Federal Center.

The Commission will erect at least two other ASM historical markers: One will be placed on the CAU quad close to where that campus converges with Morehouse College. Plans are also underway to dedicate a marker on the Morehouse campus next to the Sale Hall Annex, where the student organizers convened their first meeting on February5, 1960. 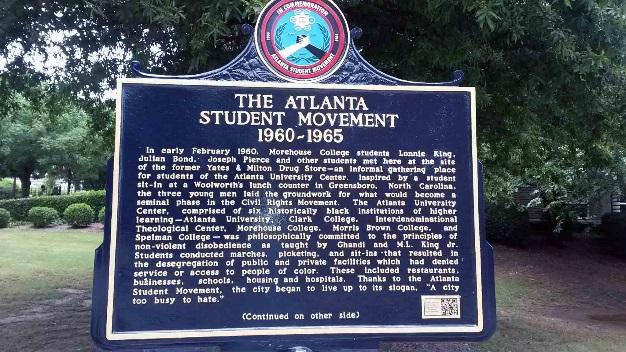 The Committee to Commemorate the Atlanta Student Movement was established in December 2019 to raise public awareness about the ASM and to publicize upcoming related activities planned by AUC schools and other higher-ed institutions in the ARCHE network as well as community organizations and individuals.

Although in-person activities have been delayed by the COVID-19 pandemic, the Committee is developing a virtual presence that will serve as the platform for myriad events and activities, including the convening of an ASM symposium and re-enactment of the pivotal march in October 1960, which started in the AUC, continued passed Rich’s and other segregated businesses downtown, and ended at the state Capitol. Other events will include virtual exhibits, podcasts and conversations with veterans of the ASM shared on YouTube. Early in fall 2020, the movie Foot Soldiers of the Class of 1964, which recounts the activism of Spelman students during the ASM, will be streamed and a virtual panel discussion will follow.

Clarissa Myrick-Harris is Chair of the Division of Humanities and a professor of Africana Studies at Morehouse College.