By Stephane Dunn, Samuel Livingston, and Leah Creque
May 9, 2020

Louis Delsarte was a visual griot and jazz maestro on canvas. As a storyteller in the African tradition, his art continually pays homage to the ancestors, our history, and humanity. Like August Wilson in words on the page, Louis Delsarte continually captured the beauty and spirit of black people’s resilience in the midst of this long, strange and painful journey. He understood that neither ugliness nor beauty alone were truth. His work celebrates that truth of which the poet Langston Hughes once wrote: “We know we are ugly and beautiful too.” 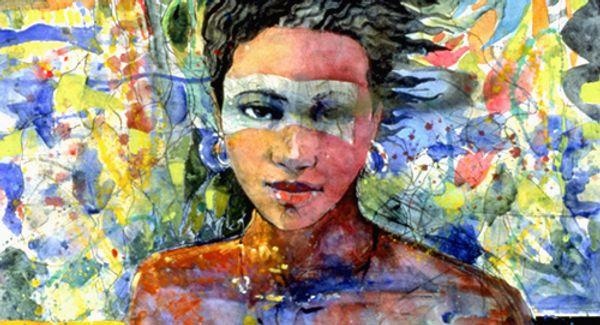 Louis’s artwork stands as a portal into the rhythms of African Diasporic history and culture. Imagine a textbook composed of visual stories that, at first glance, appear static. But, then there is the recognized face or form--from a church service, a sunny park day, a bluesy jazz club, or a lover’s bedside--that invites the visual reader into a world of beauty parallel to our own drylongso world. Louis’s visual quilts of color evoke another life-world echoing the historic disturbances of this mundane world, but transmuting pain into beauty.

Delsarte’s oeuvres invite the sensorial gaze of the imagination into a world in which there are no boundaries of beauty, no limits of experience, and no depths to sentiments. This ability to capture, transport, transmute, and transform the viewer’s gaze from the mundane to the transcendent is a part of the artistic genius of Louis Delsarte. Though his palette was divinely powerful, Delsarte did not distance himself from the subject, the audience, the public, or private space. The canvas, the wall, the sidewalk, the paper, the I-Pad, bore his boundless creativity. 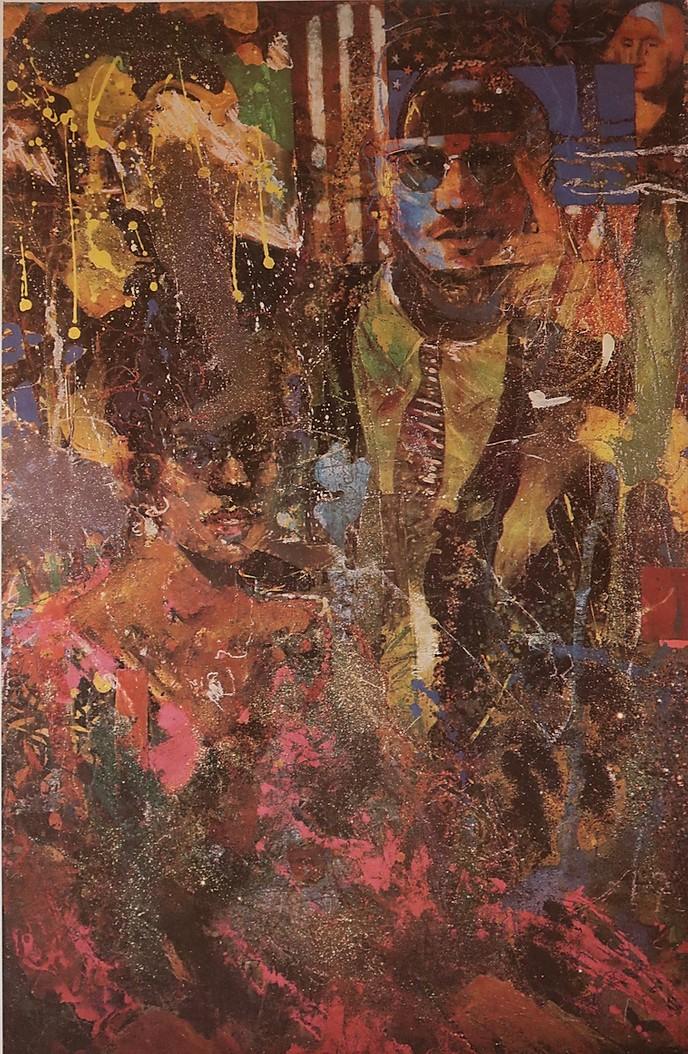 Delsarte’s friend and colleague, Dr. Clarissa Myrick-Harris, formerly Chair of African World Studies at Morris Brown College and now Chair of Humanities at Morehouse College saw his unique vision over the past 30 years, “Louis was both an artistic genius and a beautiful spirit. Morehouse College and each of us were blessed to have been on the planet to experience this unique individual. There was no one on earth like him. It was as if he dwelled in another dimension, one that collapsed space and time, one that allowed him to commune with the Ancestors and then come back to our plane of existence to tell their stories on canvas. I will miss his earthly presence, but I am sure he is now fully in that other dimension with celestial paint brush in hand and honored by his fellow Ancestors.” Dr. Uzee Brown, Professor of music and Chair of the Creative and Performances Arts Divisions adds, “He was one of the warmest and gentlest persons in spirit that I have known in all my years of teaching. He will certainly be missed by students and colleagues alike.”

He was ours, but Delsarte communed with the whole canvas of humanity and the possibilities therein. Injustice pained and enraged him - and as Bird, Monk, Coltrane, Miles, and other greats did, Delsarte expressed his soul and communed with the souls of others through the bold dance of images in vibrant color - blues, reds, yellows and mixed media, reminding us of the great artist forebears - Jacob Lawrence, Romare Bearden and others that baptized his artistic becoming. A Louis Delsarte work demands, no compels, the gaze to return again and again: “It’s jarring in this incredibly wondrous way,” Morehouse  professor-filmmaker Avery Williams describes, “You see there’s a story with a beginning, middle, and end that you’re looking at it. You hear jazz and you keep looking and return again and again to take in the fullness of what Delsarte has created. That’s what we wanted to invoke in the short video.” 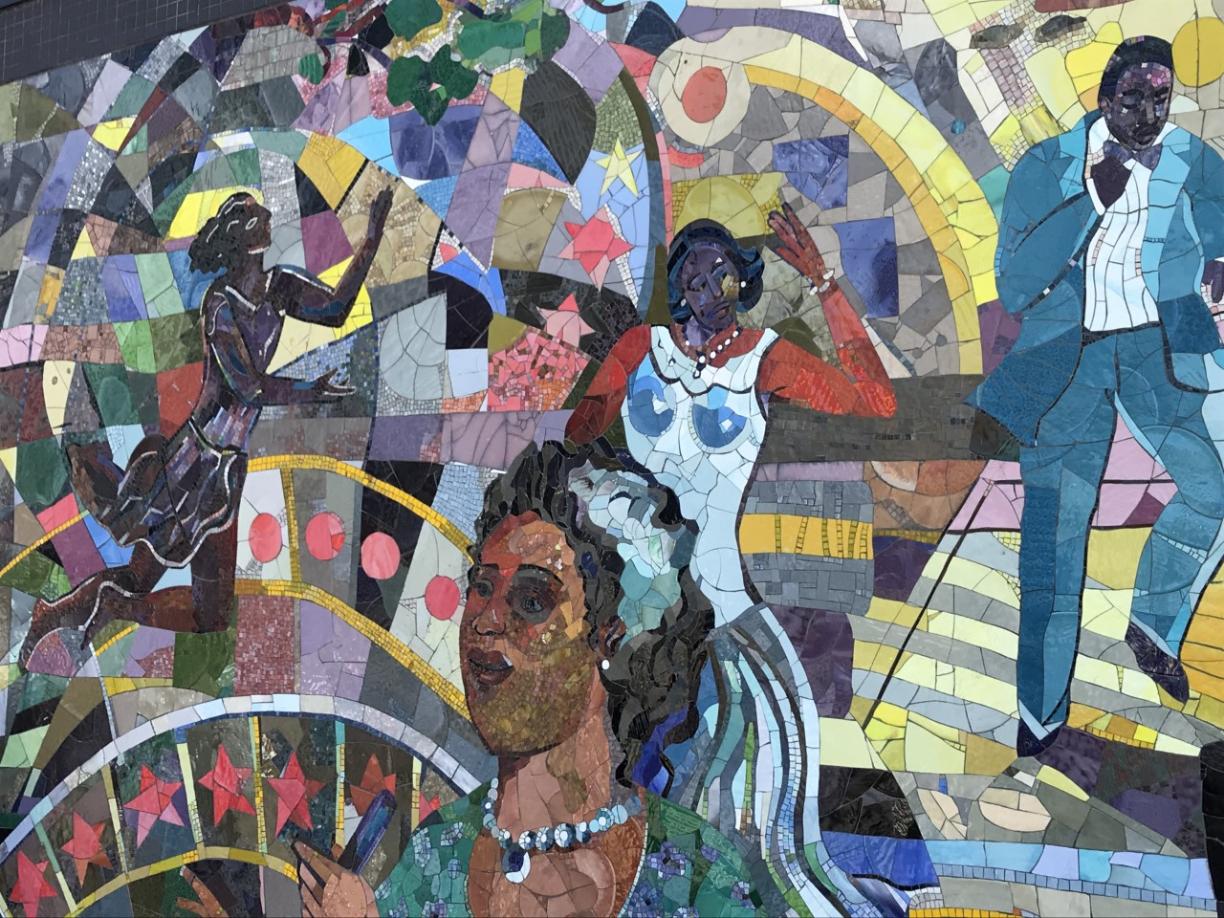 Delsarte was a world-renowned artist with commissioned paintings and murals in famous public art spaces such as the Martin Luther King Jr. Historic District and in such sacred places as Abyssinia Baptist Church in Harlem. His work is proudly displayed in international museums and in the homes of prominent collectors. But here at home, this beloved husband of Jea Delsarte and loving father, was our incredibly humble colleague and professor. Though his degrees were not obtained at Morehouse College, he was a Morehouse Man in his essence and in his unwavering support of this institution. He was so proud to be here, and we were proud to have him.

In his humble demeanor, Louis Delsarte was a participatory artist who wanted nothing more than to be with each of us to share humanity together. He saw the artistry in each of his family and friends and so sweetly blessed them with the needed love and affirmation that only his keen eyes could see. He generously molded his students into living works of art to carry forth a rich legacy of those who inspired him to value the memories of the African Diaspora. Now it is Louis Delsarte who will continue to inspire, from beyond the veil, the continuum of truth in creativity and culture.

Life beats down and crushes the soul.  Art reminds us that we have one.